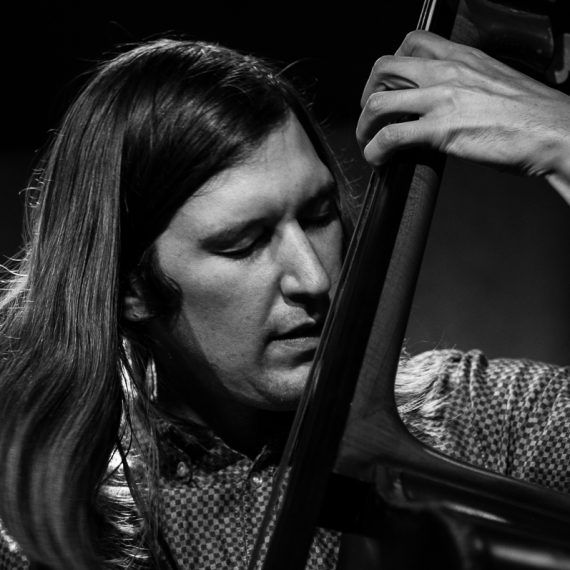 Chicago based bassist/composer and bandleader, Matt Ulery, has developed an instantly recognizable sound.  Known for his sweeping lyricism, unconventional phrase structures, expressionistic emotionalism,  Ulery’s music is informed by the entire spectrum of jazz, classical, rock, pop, and folk– specifically American, South American, Balkan, and other European folk styles. He performs not only on upright and electric bass, but doubles on tuba. For a decade, Ulery has been the leader of his own groups, Loom, By a Little Light, and a member, among others, of Eastern Blok, and the Grazyna Auguscik Group.  Ulery has produced and released 6 albums of all original music under his name including his two most recent releases of critical acclaim, “By a Little Light,” and “Wake an Echo,” on Dave Douglas’s Greenleaf Music record label in 2012 and 2013.   Ulery earned a Master of Music degree at Depaul University and Bachelors degree in music composition at The Chicago College of Performing at Roosevelt University and has played in bands with Kurt Rosenwinkel, Phil Markowitz, Fareed Haque, Howard Levy, Patricia Barber, Goran Ivanovic, Jeff Parker, Zach Brock, and many others. When not touring parts of the U.S. and Europe, Matt appears regularly in the Chicago area music venues and has played performed with his groups at prestigious venues such as Carnegie Hall, Chicago Orchestra Hall, Millennium Park Pritzker Pavillion, Chicago Cultural Center, The Krannert Center,  Blues Alley, Jazz Showcase, The Metro and countless other fine music listening rooms.
mattulery.com

Musicians performing at Chopin IN the City Festival